Never give up without a fight: Rustin’s story

Rustin’s battle began with a strange pain in his leg. This ache persisted and became ever more intense until one night, he could barely walk. Rustin’s partner finally convinced him to go check it out with a medical professional and it didn’t bring good news.

The doctors had found a massive blood clot in Rustin’s right leg. After repetitive unsuccessful attempts to remove the clot, Rustin asked the doctors if at some point he would have to have his leg amputated. The doctors said it was most likely that amputation would be necessary. Rustin thought and replied that if he was going to learn to live with only one leg, he would rather start sooner than later. The doctors gave him 6 weeks to think about the decision. During those weeks Rustin began to try some activities using only one leg as a way to see how it would be.

As the pain in his leg became unbearable, Rustin decided to go ahead with the below-the-knee amputation surgery which didn’t go as planned. After the surgery, intense pain persisted. At first, Rustin thought it was somewhat normal, his leg had been cut off after all. but after a while, his suspicion of something gone wrong increased and after a medical checkup, more bad news awaited. Something was wrong indeed and the doctors said the best way forward would be to cut some more of his leg above the knee. Rustin knew that his life would get even harder than he initially expected.

Having lost his wife to brain cancer a couple of years prior and then losing a leg brought Rustin to rock bottom. The variety of painkillers didn’t help and Rustin kept thinking “what am I going to do with the rest of my life?” He then remembered what his wife used to say: “Be Bold”.

When his friend Ryan Schults took Rustin to the gym, he began to hit the heavy bag and all that build-up pain and uncertainty began to escape. It felt therapeutical so Rustin became dedicated to relearning martial arts and jiujitsu in particular. Rustin had recovered his strength and was back on his feet, even if one was made of metal and plastic. “The great thing about jiujitsu is that the playing field between amputees and non-amputees is actually quite leveled. Not having a leg for the opponent to grab can actually be an advantage.” My coach always told me to take my disability and turn it into ability. To take my disadvantage and turn them into my advantage. And that’s what I learn and have been teaching too.

From there on Rustin became ever more involved in the community around him. He handcycled over 600 miles over the course of a week with a fellow army veteran to raise funds to support a family who had also lost a dear one to brain cancer. Later on, Rustin founded B-Bold, a program designed to train adaptive athletes. Through B-Bold Hughes is helping other people regain their active lifestyle and that’s what we are all about too so when Levitate went to Colorado, we just had to meet him at his gym – Trials MMA in Fort Collins. 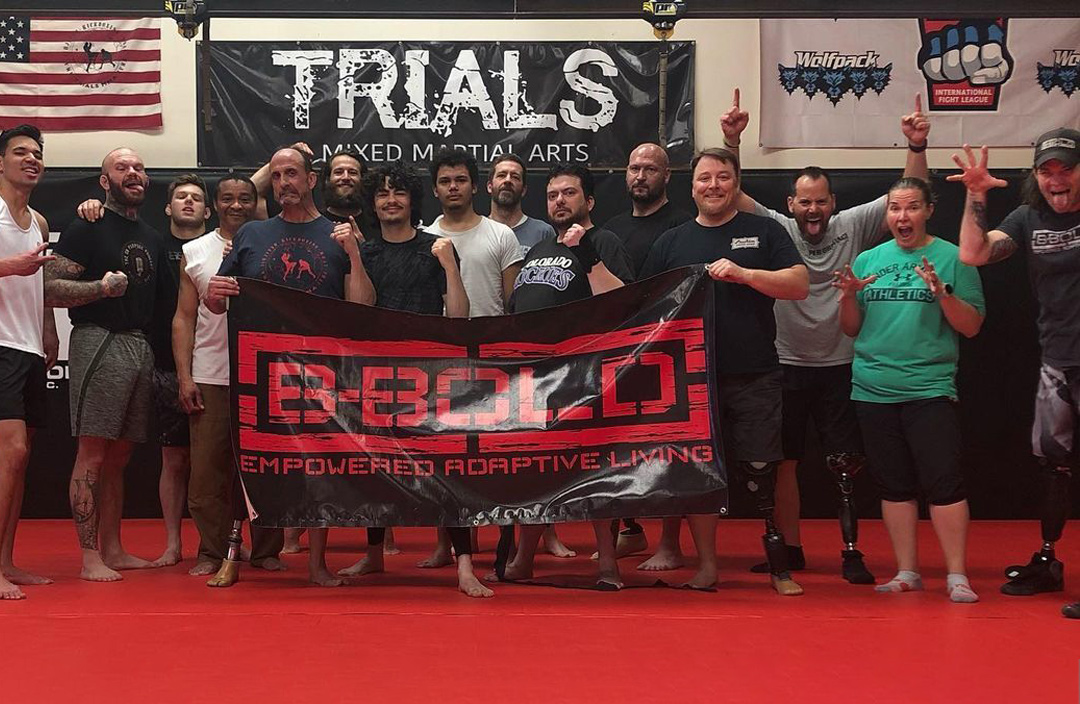 It’s all about the mindset

When we got to the gym we began preparing some blades for people to try out. One of Hughes’ friends assembled it first and gave it a go. When he took it out, Hughes just grabbed it, put it on in a matter of seconds, and nearly immediately started running. “It took a few seconds to get the hang of it but then everything just clicked. The return was amazing and I felt like I was finally putting weight on my right leg. it was awesome!”

“I had tried a running blade before but honestly it didn’t feel great and never tried it again. When I installed the Levitate blade it just felt right! I’ve been talking about it nonstop since then. I really want to run a 5k now!”

When we asked Rustin about his life as an amputee and his thoughts on disability he said: “You know, I think I was more disabled when I had two legs. My disability was in my mindset. In many ways, losing my leg was a blessing in disguise. It taught me how to live more fully and has taken me on an amazing journey with amazing people I would have not met otherwise. When I was in Abu Dhabi for an MMA fight they told me that in their language they don’t really have our definition of “disabled”, they call it “people of determination” and that’s exactly what it should be. It’s all in the mindset” 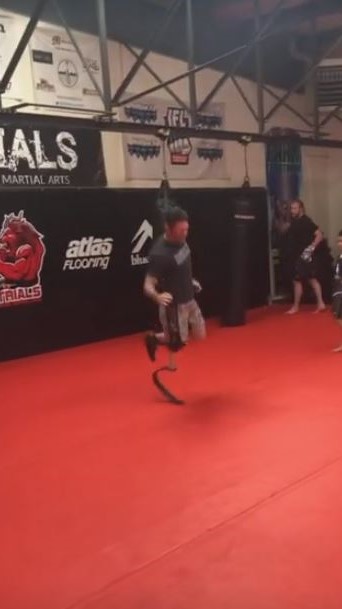